A small town on the east coast of Sicily

History of the “Tuna-Fishing Net”

The Balata of Marzamemi

A short distance from Pachino, to the tip of Sicily stands the fascinating village of Marzamemi. Famous for the sea, always clear and blue and the sea world fishy, Marzamemi charms visitors above all for the beauty of its beaches, as the Spinazza and Marinella, brightly coloured and fine sand.

Marzamemi is a true piece of paradise, which tells the story of a place of landing, and later became the enhanced port by the “Principes of Villadorata”, that there built the own residence, the Palace of Villadorata.

It is still debated the origin of the name, which derives from the Arabic for some implantation “port” and memes “small”, for others, but always from Arabic to mean “bay of turtledoves”. In the central square, where there is the church of San Francesco di Paola, folkroristicly celebrated in the month of August, there are typical houses of fishermen, transformed into taverns and places of high level cooking. Here, where the nightlife is concentrated in the warm summer evenings, we are served the best dishes and appreciated local cooking, seafood, bottarga and cherry tomatoes, accompanied by a glass of Nero d’Avola wine. But the true king of the gastronomy of the place is the tuna resource of the village, which has always worked on the spot, the famous tuna.

Marzamemi recently, thanks to the visibility obtained as a location for several films (such as South by Gabriele Salvatores), is betting heavily on tourism since 2000 and it is also the home to the Film Festival. 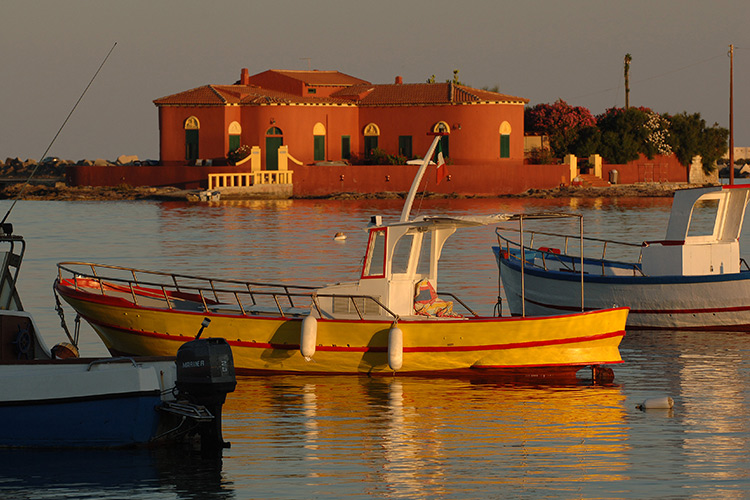 Looking at the Ionian Sea, off the port of Marzamemi you can see a small islet called “Brancati Island” or “Small Island”. The island is private and belongs to Pachino Raffaele Brancati. To occupy the entire outskirts of the islet is a small red villa, surrounded by a thin vegetation. The Brancati island is placed under the Pachino administration-, 3 km away from Marzamemi and its name derives from the name of the writer and playwright Vitaliano Brancati, of Pachino origin, who seems he stayed on this island.

History of the “Tuna-Fishing Net”

The origins of the historic “Tuna-Fishing Net” of Marzamemi are very old and date back to the Arabs, who during the eleventh planted what became the largest tuna in eastern Sicily. The real development of tuna came however in 1752, when the Prince of Villadorata Nicolaci decided to build the village of Marzamemi and there his residence, to manage trade and economic activities, focusing mainly on fishing and tuna processing.

The first plant for production of tuna, date to 1912, and remained active until the Second World War. For over thirty years the activities of tuna has been suspended but at least the ancient factory was recently renovated and is now used as a hall of representation. 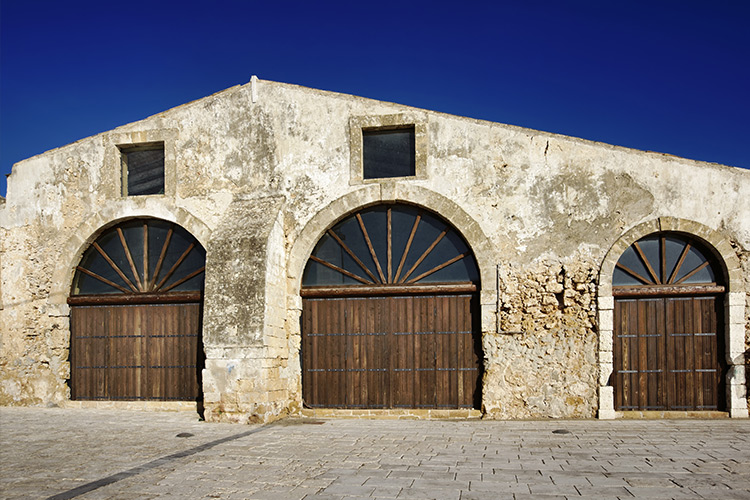 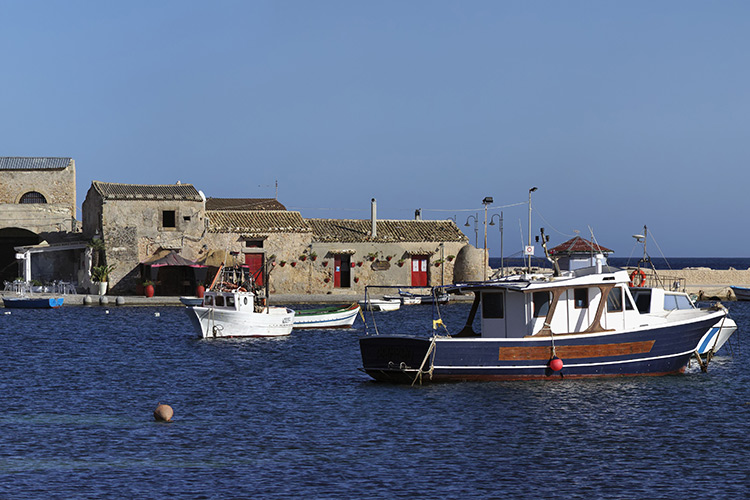 The Balata of Marzamemi

The Balata, which takes its name from the Arabic “balad” (in reference to the ancient paving stone slabs), is the second small port of Marzamemi and represents a crucial point, one side facing the economy, the other to nightlife. The Balata consists of two large halls, the “Old Factory” and “House Cap”, the first one which is used as a local.

Speaking of fun, on the occasion of your visit, you cannot give up a walk around the Queen Margherita square, to purchase items from the stalls, tasting ice cream and sorbets and miss especially in the view of the sea. In particular, as of late July, the Balata real town square comes to life and there may happen to watch a performance of the “International Film Festival of the Frontier” or to meet some famous celebrities among the shops in the old town.

In the heart of Marzamemi, on the west side of the square is the Palace of Villadorata. The palace was built in sandstone around the ’700 by the Princes of Villadorata, lords of Marzamemi to have a privileged point of view on the work and businesses asset village. Palace Villadorata no artistic inside because it was looted during the Second World War. The focal point is the huge courtyard, which radiated light also illuminates the interior. The whole accommodation is very simple and basic. Through a stone staircase, two ramps, one arrives at the apartment of Prince and from there to the spacious terrace, chosen as the scene of some famous films.

Palace Villadorata represented the central gathering place for fishermen and for totally fulfill this function was built overlooking the current Piazza Regina Margherita. Yesterday, like today, the Piazza Regina Margherita is a symbol. Here, every year, are held many summer events, such as, for example, the International Film Festival of Frontier and the event Goblets of Stars. Since 2007, in favor of the tourists, the administration also concluded some redevelopment work, installing a new lighting throughout the square and in the alleys and redoing the entire flooring in original style of the old town. 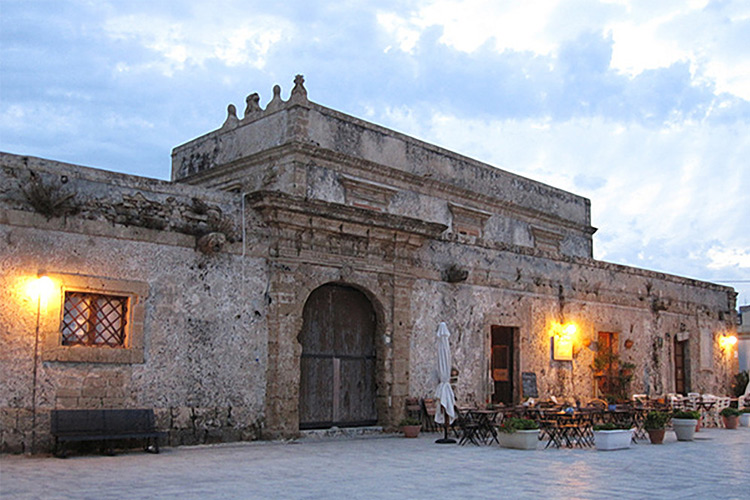 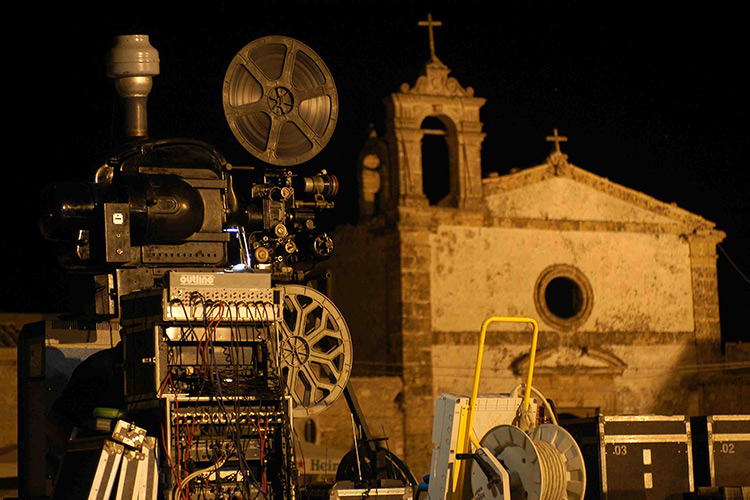 The International Film Festival of Frontier is now a fixture, which ranks every year in late July, is enthusiastically awaited by villagers and tourists. On the occasion of the International Film Festival of Frontier, the main square of Marzamemi, Queen Margherita, it turns into a real movie theatre in the open air, the further south of Italy and the largest in Europe.

The Film Festival is a unique opportunity for film lovers, who have the opportunity to meet actors and directors of international fame. As said Nello Correale, founder and artistic director of the festival is: To be staged, the largest natural stage of Marzamemi, old films are not obsolete but a film advanced, looking to the outside, characterized by a symbolic value. The Internationa Film Festival border every year, aims to promote the territory and to deepen cultural artistics themes, new and updated. The organization of the event is entrusted to some traders and citizens of Marzamemi and Pachino, which are part of the Consortium Mall Natural Cinercircolo Marzamemi and the International Border Film Festival, also supported by local operators, directors and key players, interested in the promotion of art, in all its facets.